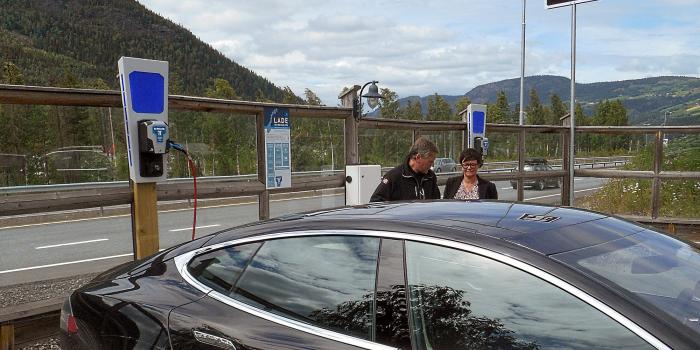 Hafjell Hotel has a charging station for electric and hybrid cars located at the parking lot outside the hotel. With Type2 charging socket is this charging station universal and independent of the car model. All cars can charge provided that they have brought with Mode 3 charging cable to suit their particular car model. 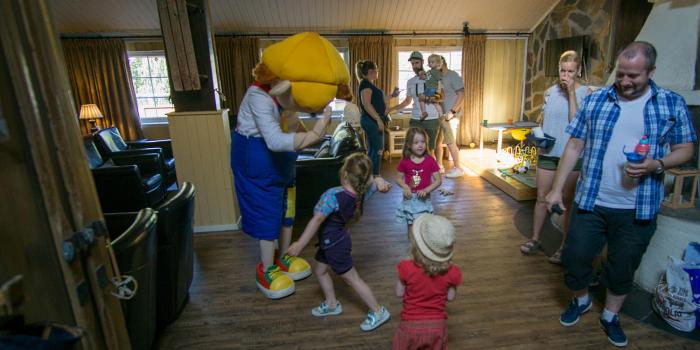 During the spring, a new playroom will be built for our youngest guests. The new playroom is right next to the restaurant. In addition, hotel guests have access to Lekeland Hafjell for a few hours after Lekeland has closed for the day. Contact the reception for more information. Have fun with the children at Lekeland Hafjell since there is no employees after regular opening hours. 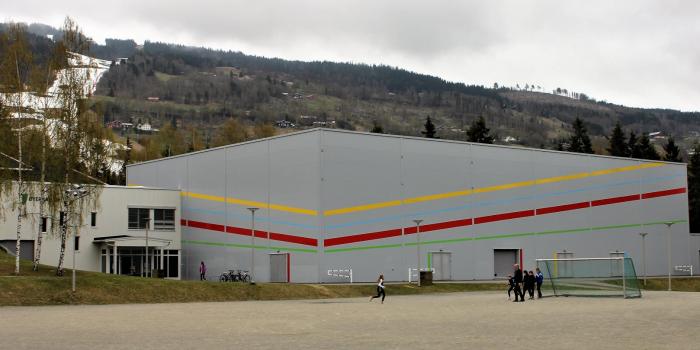 The fitness gym is located in the sport hall only 200 meters from Hafjell Hotell. Our guest at the hotel can the use the fitness room by purchasing an access card at the reception. Appliances In the gym they have 2 treadmills, 2 spinning bikes, 1 rower, 1 back trainer, bench press with bar and weights, squats "Cage" with bar and weights, leg press machine, Pulldown and seated rowing machine, "Cable pully" multi gym incline bench with dumbbells. It is set up exercise suggestions for each appliance. NOK 50.- per time for entry to the fitness room. Øyer Sport Hall is located 200 meters from Hafjell Hotell. 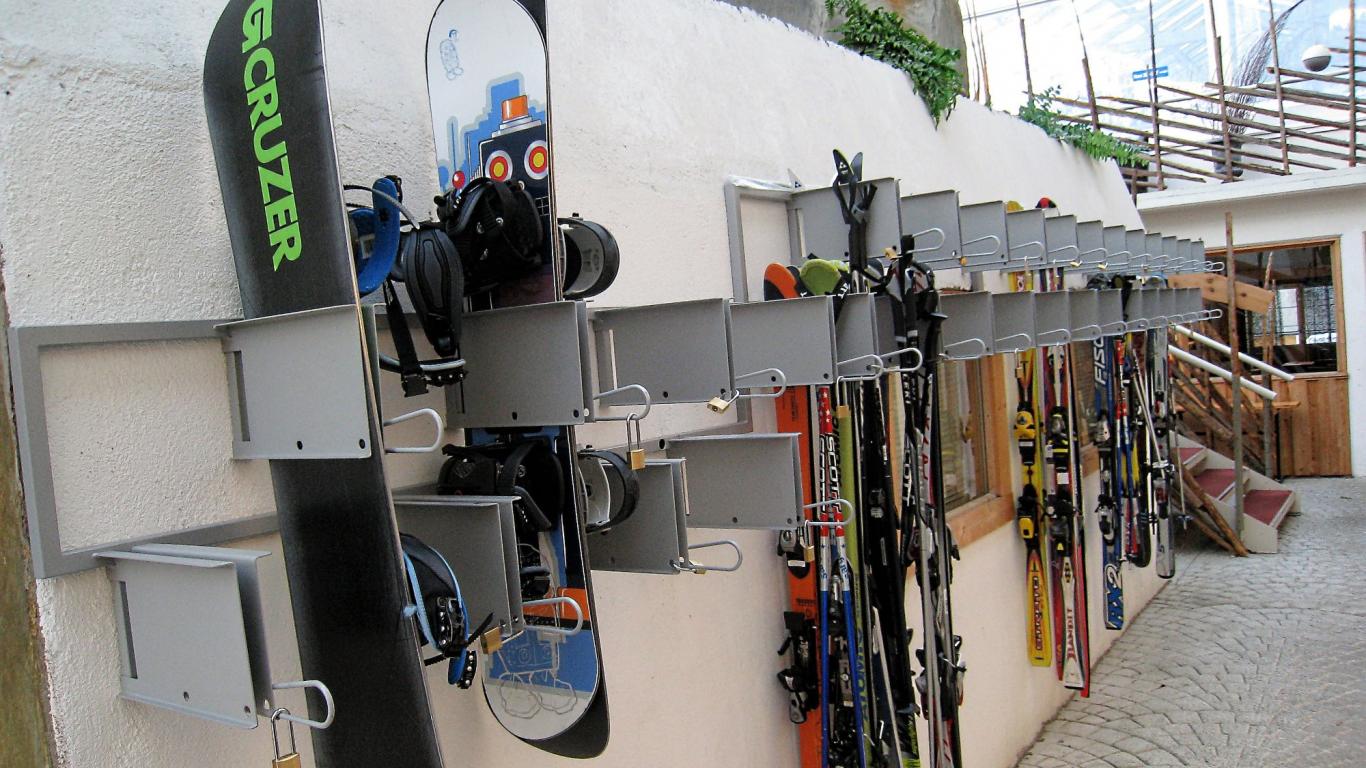 Hafjell Hotel has ski lockers in the middle of the hotel, not far from the reception, lounge and hotel rooms. Here you will meet other guests from the hotel in the afternoon for a friendly chat after a long day on the slopes. Ski lockers at the hotel are spacious and here guests can lock up your skis after a long day of skiing in Hafjell. You pay NOK 100 - deposit for a padlock at the reception. Ski lockers at Hafjell Alpine center Rental of ski lockers at Hafjell Alpine center, downstairs to boarding the gondola. Contact the information office at Hafjell for reservation. Open daily from 07.00 - 21.00 in the winter season. Each ski locker have room for two to four pair of skis. In addition, downstairs there are showers and toilets. You can also rent small lockers to store other equipment and clothing. 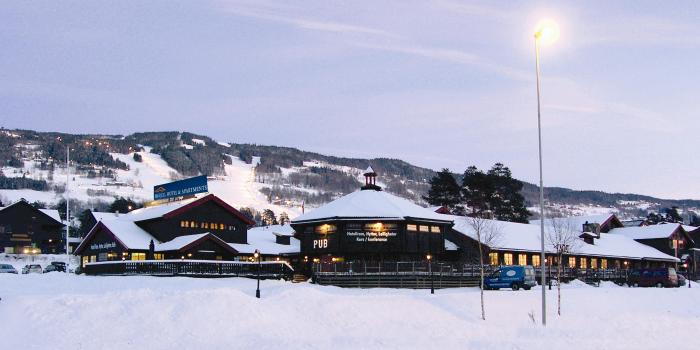 Øyer Gjestegård The owner and manager at the time Mr. Kjell Madsen started building Øyer Gjestegård in 1978. He wanted to create a place with a wery special atmosphere for entertainment and staying overnight. Kjell Madsen made, together with his wife at the time, decorations, equipment and furniture. This gave Gjestegården a special and different characteristics, and it proved to a success soon after the opening on the 1.July 1979. The last development which was done in 1987-1988, doubled the capasity of guestrooms and included a swimming-pool and water disco.  In July 1983 Lilleputthammer opened. The time of Winter Olympics in 1994 was a good period for Gjestegården. But the time shortly afterwords was difficult for the business, and in 1996 Gjestegården was taken over by the company Viking Gruppen. Hafjell Hotel &amp; Apartments In 1996, Viking Gruppen AS (now Welle Gruppen AS) bought Øyer Gjestegård. On 15th of May 2007, the name changed to Hafjell Hotel &amp; Apartments. In the years before the change of name, the inn, kitchen and conference rooms were refurbished and the hotel got a new fireplace. Hafjell Hotell, Gjestegarden i Øyer In 2008, all rooms were renovated in the hotel and in 2011, a major rebuilding of the restaurant was carried out into several cozy living rooms and a new buffet area. The hotel was also environmentally certified as the environmental lighthouse in winter 2011. Best breakfast Twinings Best Breakfast awarded in 2017 Norway's best breakfast for 13 years in a row. Hafjell Hotell became county winner in Oppland as the hotel with the best hotel breakfast. This was the first time a hotel from the Lillehammer region won this competition. In June 2018 it became clear that Hafjell Hotell had managed to copy the victory and was voted again to the hotel with the best hotel breakfast in Oppland county. In 2017, the hotel was renamed Hafjell Hotell AS, Gjestegarden in Øyer. Read more about history of Hafjell 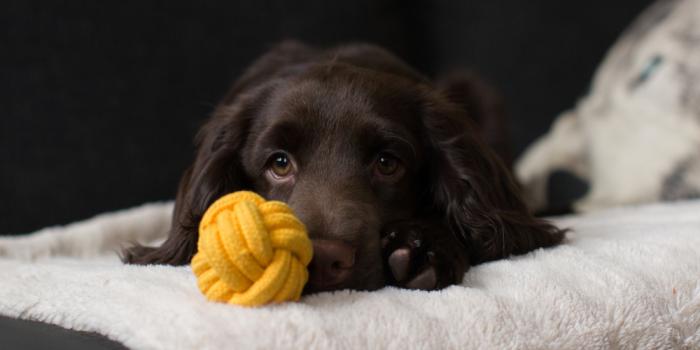 Pet friendly hotel Many will bring their dog or cat on holiday and now we make it easier for dog and cat owners in Hafjell. Hafjell have booked two double rooms for guests who bring their dogs or cats. An additional charge NOK 200 - for the stay goes to extra cleaning of the room. When you book a room at Hafjell Hotell remember to let us know that this includes dog or cat. Pet-friendly cabins, apartments and chalets in Hafjell  Bergstad 16 Bergstad 17 Nordlia No. 11 Nordlia No. 12 Nordlia No. 19 JaerTunet apartments Alpin Apartments Solsiden (some units are reserved for families with pets) Alpin Apartments Sørlia  (some units are reserved for families with pets) All these cabins and chalets are located so that it is possible to go hiking with our dog along roads or footpaths. An additional charge of NOK 200.- for the stay goes for extra cleaning of the room / unit. 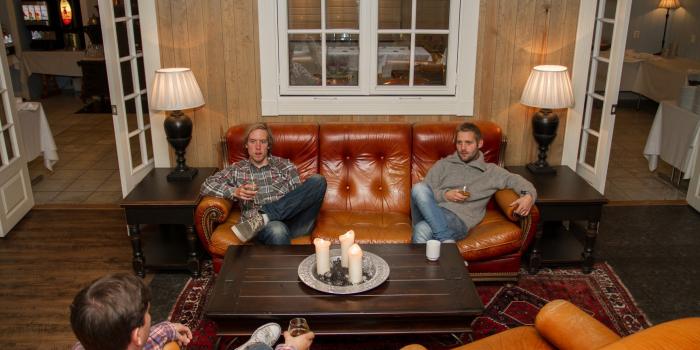 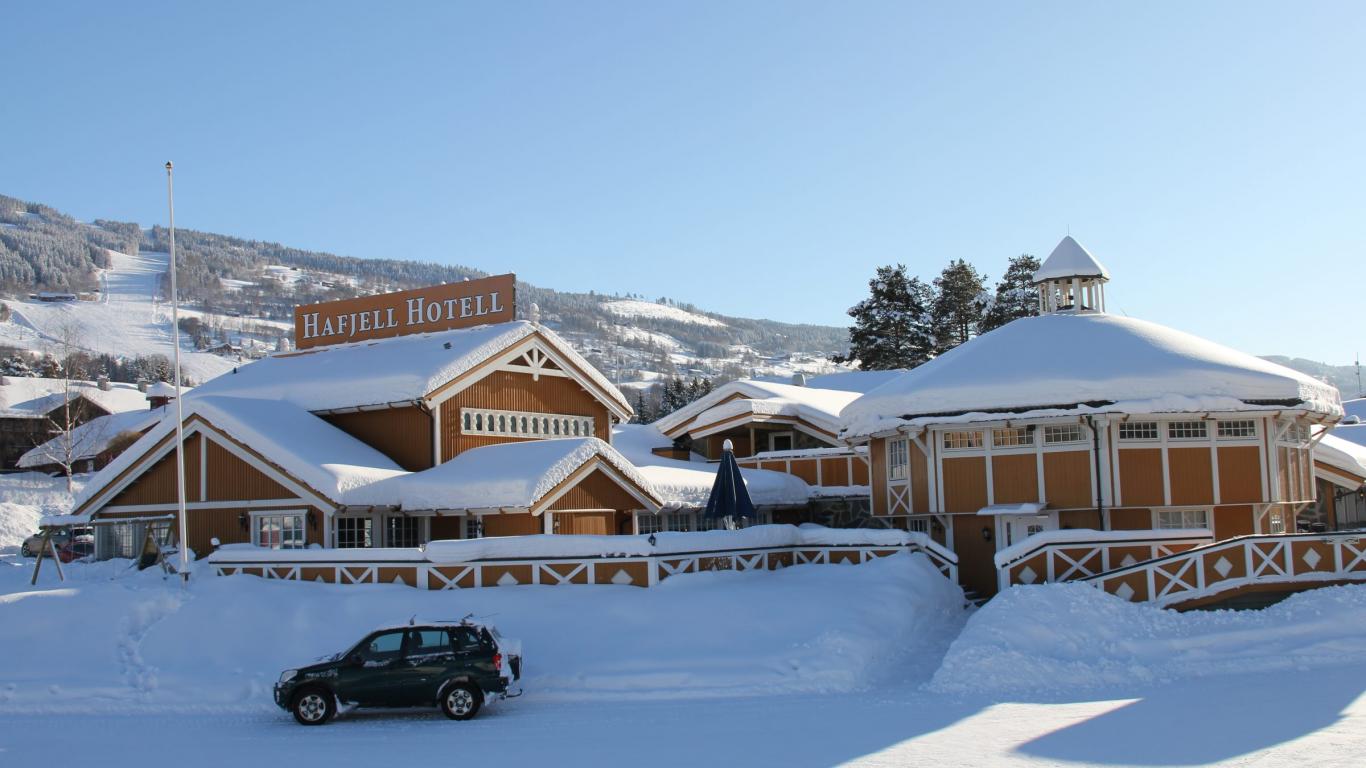 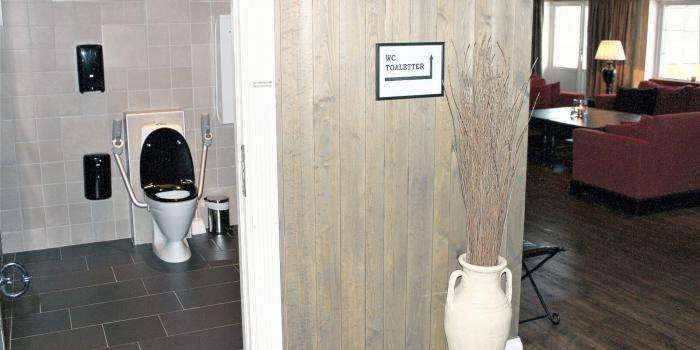 Hafjell Hotell has a disabled toilet at the fireplace room, a telephone loop in the reception and meeting rooms, and that most of our dishes are lactose or gluten free. Both the reception, library, fireplace room, island room, hafjellsalen and restaurant with the living rooms are on the same level. There is easy accessibility between these facilities. From the parking lot there is a separate ramp at the entrance to E 6. Here wheelchair users can enter directly into the restaurant. 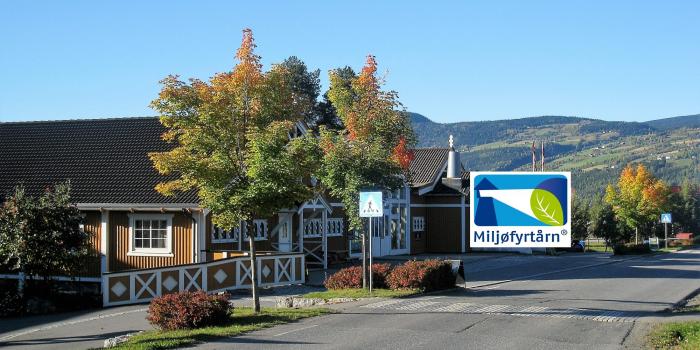 Hafjell Hotel was certified as an Eco-Lighthouse winter of 2011 after long-term process and cooperation with environmental Lillehammer, Oppland County and Oyer community in Norway. For the hotel, it is important that there should be minimal use of disposable items such as plastic glass. The hotel focuses on energy management, waste disposal, health and safety efforts on behalf of employees. The hotel uses eco-labeled products in the cleaning and is actively working to introduce greater use of organic foods in their dishes. The hotel is helping to fund the free ski bus to the Hafjell ski resort to reduce car usage and thus make Hafjell more environmentally friendly. 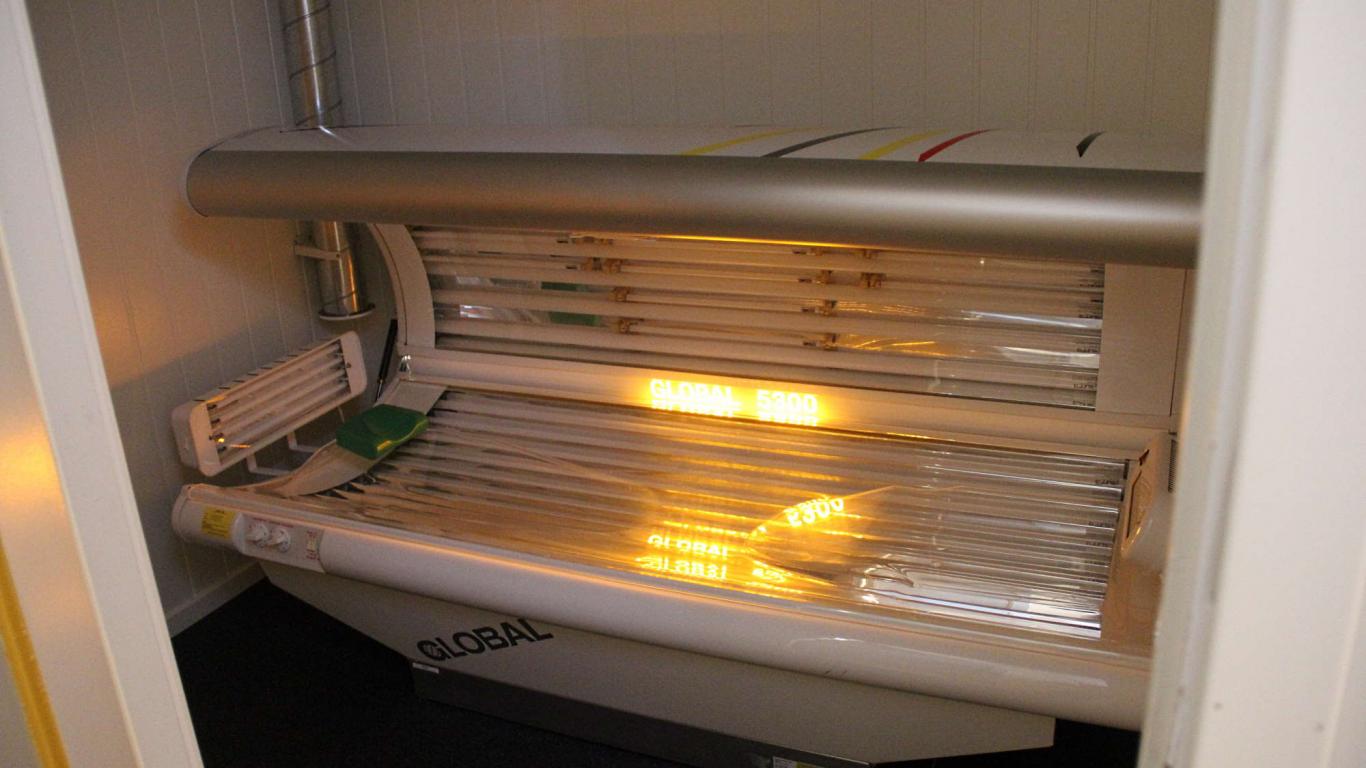 Hafjell Hotell has a solarium, showers, toilets and changing room downstairs. Contact the reception for use of the solarium and showers. Our offer is perfect for guests who have checked out from the hotel and then have a ski day in the resort center. Then it is good to return to the hotel for a hot shower before leaving home. The offer is for our guests and the prices are friendly.